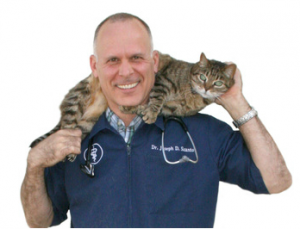 Dr. Szanto graduated from the University of Illinois, College of Veterinary Medicine in 1985. His father was a veterinarian, and as long as he can remember, Dr. Szanto wanted to be one too. The thing he likes best about Veterinary Medicine is that it is never boring; he enjoys the challenges and rewards that come with the job. Dr. Szanto is adventurous and good natured. His activities outside of work include spending time with family, camping and traveling. Apart from being an excellent Veterinarian, Dr. Szanto is unusually mechanically inclined, he can fix just about anything! As of now, Dr. Szanto is only working intermittently, so he can focus on being an outstanding Medical Director! 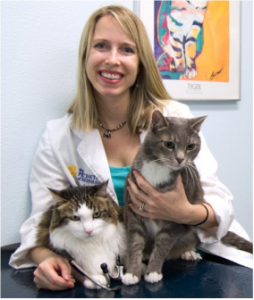 Dr. Cox grew up in Atlanta, GA. As a child, she was always interested in animals. She was always coming home with frogs, beetles, kittens and puppies. She even asked Santa for a Capybara for Christmas! By early childhood she had decided that she would be an animal doctor. Dr. Cox is a graduate of The University of Georgia. She attended UGA as undergraduate, majoring in Biology and Entomology and graduating Phi Beta Kappa. She stayed on at UGA to complete her Veterinary degree, graduating Cum Laude in 2004. After graduation, she spent two years in emergency medicine at a large, 24 hour hospital in Baltimore, MD. Never the night owl, the overnight shifts became tiresome, and a change of direction landed her here in Los Angeles, practicing at The Pet Doctors, where she has been since 2006. Dr. Cox lives with her husband, her two cats (Toonces and Blanket), and two rats (Marsha and Jan). She also has two cats that live at the office, Timmy and Rupert. In her free time, she likes to paint, travel, hike and work in the garden. 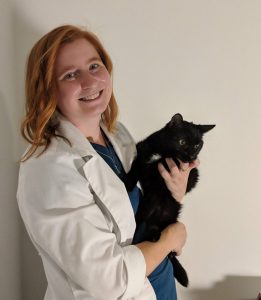 ​Dr. Nellett is a graduate of the Tufts Cummings School of Veterinary Medicine in Massachusetts and has known since she was a child that she wanted to be a vet. She grew up in the suburbs of Philadelphia, PA and followed her father into military service after graduating from veterinary school. She completed her internship with the US Army at the Ft. Bragg Veterinary Center in North Carolina, one of the largest medical centers for military working dogs in the country. After fulfilling her military obligation, Dr. Nellett was drawn to the great weather, delicious food (and wine!), and friendly people of California and found herself at the Pet Doctors of Sherman Oaks. Dr. Nellett has particular interest in nutrition and sports medicine and has a soft spot for difficult cats since her childhood cat was one of them! She lives with her boyfriend and their two cats, Merlyn and Raina. Her hobbies include travel, wine tasting, gaming, and reading. Dr. Nellett looks forward to helping you provide the best preventative and sick care possible for your pets! 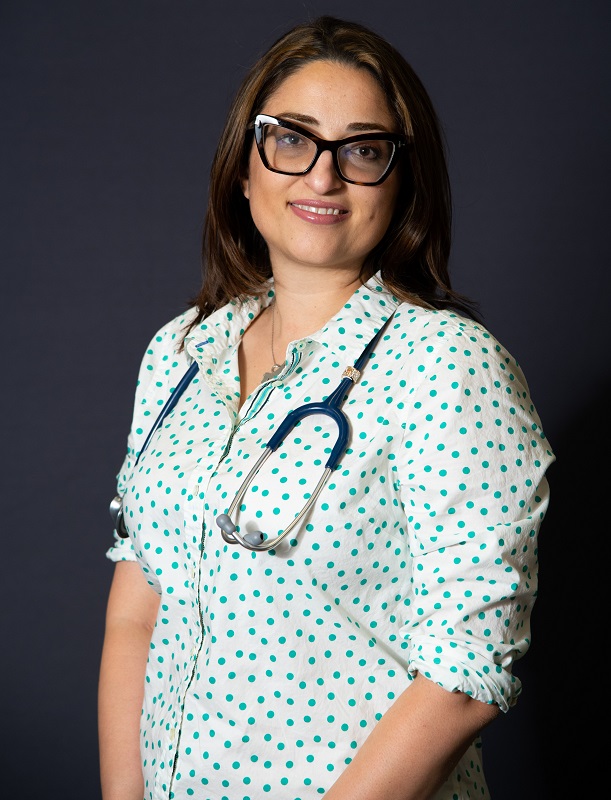 Dr. Nazbanoo Pahlavi grew up in Tarzana, attended Viewpoint School in Calabasas, and obtained undergraduate and graduate degrees from Pitzer College and Carnegie Mellon University, respectively. She has worked as a docent at the Museum of Tolerance, a freelance print journalist, and a development coordinator at the Jules Stein Eye Institute at UCLA. The unexpected loss of a pet cat in adulthood led to her interest in animal health and welfare which she then pursued, graduating from the Virginia-Maryland College of Veterinary Medicine in 2019. Her areas of interest include nutrition, neurology, dermatology, pain management, and working closely with owners to provide high-quality medicine. She is also currently pursuing certification in veterinary acupuncture and herbology. Dr. Pahlavi is a member of the American Veterinary Medical Association, California Veterinary Medical Association, Southern California Veterinary Medical Association, and American Association of Feline Practitioners. She lives with her two “foster failures” – a Bichon Frise-mix named Reggie and a domestic long-haired cat named Vicky. In her free time, she enjoys wine tasting, reading, and is an active member of Romance Writers of America. 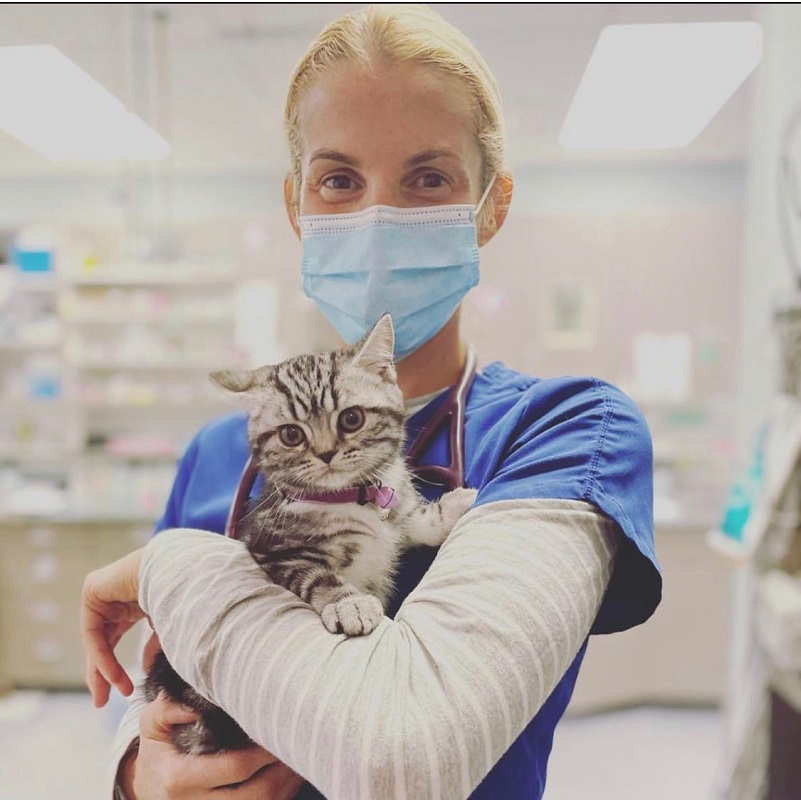 Dr. Achenbach is a graduate of the University of Pennsylvania School of Veterinary Medicine in 2003. She knew that she wanted to be a vet after her first ride with an equine vet as an 8-year-old. She grew up in New Jersey and has practiced all over the world including Hong Kong! After graduating from school, she completed her internship at Blue Ridge Equine Clinic in Charlottesville, VA. Dr. Acenbach worked with horses for 4 years and then switched to small animals and hasn’t looked back. In 2012, Dr. Achenbach moved to sunny California to join her husband out here. She started at The Pet Doctors in 2016. She lives with her husband and their two young boys, Christian and Parker. She also has two cats, three dogs, and a horse living his best life in Solvang. In her free time, she enjoys chasing after her kids, reading, and riding horses. Dr. Achenbach looks forward to helping you provide the best preventative and sick care possible for your pets!

Jessica joined the team at The Pet Doctors of Sherman Oaks in August of 2016. Jessica has been in the Veterinary field for over 25 years with 20 years exclusive to veterinary practice management. She acquired her certification in Veterinary Practice Administration in 2011from the AAHA/VMI Institute at Purdue University. Jessica is very passionate when it comes to client service and patient care. As the practice administrator she strives to build strong relationships and provide excellent service to our clients as well as ensure the highest standard in our patient care. Her favorite part of being practice administrator is providing leadership and support to the team here at the Pet Doctors and watching them grow and succeed in their various roles. Jessica is a California native and grew up in the South Bay/Beach Cities area. She shares her home with her husband Mark, their 3 children Logun, Fischer, and Irish, and an 8 year old Pug “Roscoe”. In her free time she loves spending time with her family and friends. She also loves crocheting, knitting, watching movies, and cooking! When she has the opportunity she likes traveling and enjoying the outdoors.

Frank has been at The Pet Doctors of Sherman Oaks since March of 2016. Frank graduated from Mt. San Antonio College in June 2017 and will become a Registered Veterinary Technician in March 2018. Frank was born and raised in Los Angeles, CA and has three dogs – Benny, Oreo, and Skittles, a tortoise named Frankie and a bearded dragon named Igor II. Frank loves the diversity of cases we see at The Pet Doctors since he loves to help the doctors work up each case and see the outcome of each patient reach optimal health. He values each individual pet like his own since our patients are considered part of the family. In his free time, he loves photography, volunteers at the zoo, and enjoys anything related to science and medicine. Frank eventually would like to become a 4th grade science teacher and help shape and guide new RVTs.
​ 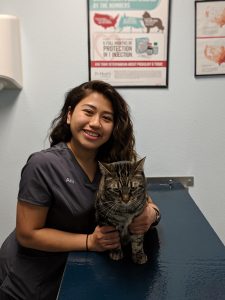 Ana has been with the team since April of 2018. She attended Pierce College and loves her time at The Pet Doctors of Sherman Oaks. She grew up in Palmdale with her four siblings and moved to the valley four years ago. In her spare time, you can find Ana working out, dancing, and hiking with her white terrier, Buddy. You may not know that she is an avid Disney fan and once won the Topanga Lawrence award at a holiday party. Ana’s favorite part of working at the clinic is that every day is a new learning experience and that she gets to help animals. 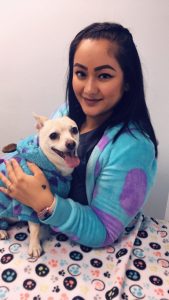 Rosie has been with The Pet Doctors of Sherman Oaks for 6 years. She lives with Minnie, her chunky chihuahua, and Sunny, her handsome Lab mix. Her favorite parts of working for the practice are Rupert and Jessica. She is married to her High School sweetheart, Hector. Rosie loves going to Disneyland, watching Netflix, and spending time with her family. Something you may not know about Rosie is that she’s a prankster, often dubbed “Queen of Mischief.” If you’re looking to bring her a snack, she loves hot fries. 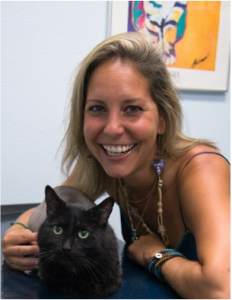 Ginger has been at The Pet Doctors of Sherman Oaks since May of 2010. She has her B.A. in Radio/Television/Film from Cal State Northridge. Ginger has been to sky diving school and studied Business at Glendale Community College. She has a handsome cat named Max; he is all black with one white spot. Her favorite part about working here is greeting and helping the clients. She has gotten to know all of the pets and it’s a very rewarding experience. Ginger grew up in West L.A. with her father, who looked after her and her brother. She also has two half-brothers about 10 years younger than her. In her free time, she has always enjoyed anything to do with the paranormal; she has attended many events and retreats associated with that. She also loves to travel to exotic places, hike, explore new places, eat healthy organic food and watch movies. A few things you would not know about Ginger is that she went to a Jewish private school and studied Hebrew for 8 years, her Hebrew name is Chanah.

Ashley has been with the team for almost a year. She lives with Coco, her terrier mix, and Shadow, her 13-year-old Saint Bernard. Ashley loves being part of the process of helping patients and answering any questions they may have. Her hobbies include “veganizing” meals, doing arts and crafts with her four-year-old daughter, Mia, and getting up a few minutes early to watch the sunrise every morning. 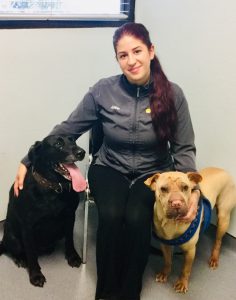 Amber has been with The Pet Doctors of Sherman Oaks for over a year now. Her furry family members include Sheeba, a Black Lab, Ramses, a Shar Pei/Staffordshire mix, Chloe, a terrier mix, a Siamese cat named Sisco, and an American Bully named Capone. She loves working with the local rescues with her great team. Something you may not know about Amber is that all of the women in her immediate family work in hospitals. In her free time, Amber loves dog training, botany, D.I.Y. projects, music, and dirt bikes. She is also a licensed esthetician. During her grooming sessions, Amber chooses specific playlists of music depending on the energy of her patient. She hopes to have her own rescue one day.

We have FEAR FREE CERTIFIED professionals on staff.

Font Resize
Contrast
Accessibility by WAH
Call Us Text Us